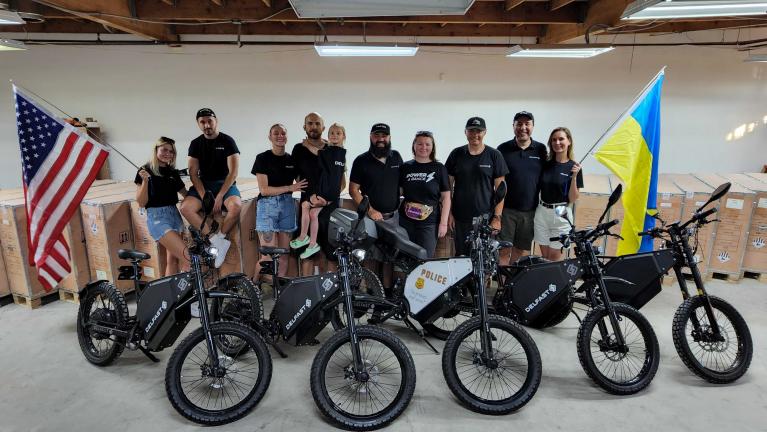 August 24th is Ukraine’s Independence Day. It also happens to be the date that marks 6 months since Russia began its unprovoked invasion of Ukraine; the Homeland of Delfast. Like any startup with Ukrainian roots, our team has gone through a lot in the last 182 days: evacuations from dangerous places, living in bomb shelters, leaving home and becoming refugees, experiencing separations from family and friends, and being absolutely exhausted by the trauma of it all.

At the same time, we have not stopped our work. In fact, we have developed new solutions for manufacturing and shipping, and even developed new bike technologies for future models. In addition to our work with Delfast, every team member has also been contributing in their own way to help fellow Ukrainians end this war.

For us, it’s an intense feeling of duty to do whatever we can; it’s the manifestation of love for our country. Ukraine is still home to more than 30 Delfast employees, and each has their own reason to love their country and continue contributing to its defense.

Read along for personal stories from our team.

“When I first started to develop the Delfast business model in Ukraine more than 7 years ago, it was an instant match. We’ve always found the needed specialists to do our work. But besides being hard-working, and real team players, these people also give me the feeling of a real family. It’s been incredible to continue our work together, and support each other, in these difficult times.”

After evacuating his family to a safe place, Serhii returned to Kyiv and has remained there since March 3, 2022. Serhii has been delivering food, clothes, and medicine to Hostomel throughout the town’s occupation. He is also taking care of his neighbor (an older lady who wasn’t able to flee from Kyiv) providing her with groceries. Serhii believes that psychological support for each other is as important as financial aid in overcoming crises.

“We are proud to have developed and manufactured the iconic Delfast e-bike in Ukraine, but our country’s innovation goes well beyond this singular achievement. AI, educational tech, fashion, and smart home solutions – these are just a tiny part of what Ukrainians offer to the world. If you want more details, visit Spend with Ukraine. I promise you’ll be surprised how many unique widely known products have Ukrainian roots.”

Serhii has been evacuating women and children from dangerous places in Kyiv since the very first days of the war. Being an IT specialist, he joined the Ukrainian ‘IT army’. His service there is create strong web platforms that support Ukraine around the world - supporting the cybersecurity of crucial Ukrainian web services, and organizing DDoS attacks on Russian government services to stop propaganda, etc.

We Have Breathtaking Nature

“Before the war, anytime I needed to recharge myself I would travel. I love to travel. And travel throughout Ukrainian is incredible. Each part of our country’s 234 sq miles is uniquely ​​picturesque: We have majestic hills that smoothly flow into the Dnipro River near Kyiv, the Carpathian Mountains with peaks more than 2400 meters, and of course the Black and Azov Seasides – which are currently occupied, but we will definitely get back.”

Olena’s youngest brother joined the Ukrainian defenders serving in the Armed Forces, at the very beginning of the war. To help him (and his unit) adjust to their new reality, she began collecting and sending supplies to the frontline: things like clothes and equipment, but also homemade cookies and Olena’s small daughter paintings. Olena believes these things help Ukrainian defenders feel the scale of support of Ukrainian society.

Our Cities are Modern & Authentic

“I’ll never stop noticing the beauty of my hometown, Kyiv. While walking around, you can always come across a charming quiet street in the middle of the busy city center, or after the Kyiv-Rus neighborhoods, you will find yourself in the high-tech district. Russia is trying to take our hometowns from us. But we’ll never allow it.”

Since the war started, Viktoria has been contributing by helping to coordinate the logistics of bringing in humanitarian aid to Ukraine from European countries. Like many, she too, had to flee from her home for the first couple of weeks - but couldn’t stay away from home for long. It’s home.

We are Cooperative Citizens

“When something threatens Ukrainians, they act. It does not matter whether they are based in LA or a small town in Ukraine. We know how to build networks. I can’t find a better example than our team. Besides constant volunteering and donating - getting involved wherever there is a need – our team started to develop a new bike with new networks shortly afterward Russia began its invasion. We are resilient and we will not be stopped.”

Daniel is very active in his support of Ukraine. Based in LA, he works with the local tech community, government representatives, and activists to consolidate efforts and stop the war in Ukraine. A founding member of ULAW (Ukrainian Leaders Against War), he actively meets with US Senators and members of Congress to educate about how individual Ukrainians have been affected by the war.

Ukrainians Have an Eagerness to Help

“Unfortunately, this is not the first time I've experienced a war brought by Russia. I was born in Georgia, and my family was forced to move because of the Russian invasion in 2008. Here, in Ukraine, I met my love, and my kids have been born here. I support the Ukrainian people. What we have is worth fighting for.”

Since the war started, Fedir has helped to organize logistics and evacuate people from the most dangerous parts of the country. At first, he focused on supplying Ukrainian defenders with technical equipment (laptops, drones), but then he started to help civilians affected by war, mostly seriously ill people. Volunteering for the Ukrainian defenders and helping people in need is Fedir's way of saying 'thank you' to those who helped him once.

Providing Connectivity to the World

“I believe that goodness is born inside of us. And I think that then, as human beings, we are called to bring that goodness and our ideas into our world and communities. The Delfast team professes this philosophy by making the world mobile, uniting people across borders. This is our strength.”

Joseph, living in Kyiv, has been delivering homeostatic turnstiles and first aid kits (from Finnish companies) and power banks with power stations for Starlink terminals (from Luxembourg tech companies) to Ukrainian defenders. He has also secured significant support from several Estonian investors and entrepreneurs to provide humanitarian support. He believes this is how humanity should work: towards unity. Together.

Delfast is Making an Impact

As you have read, our people and their passion are incredible. Our business is an extension of our people and we are dedicated to doing what we can to end this war and provide humanitarian aid wherever and however we can.

Since the invasion began, Delfast Bikes has contributed by:

Without you – this work would not be possible.

Want to Do More?

If you want to contribute to the Ukrainian resistance directly, consider donating here.

And of course, supporting Ukrainian business is a huge help. Take a look at our record-winning Top 3.0i eBike here.

Thank you for being with Delfast.