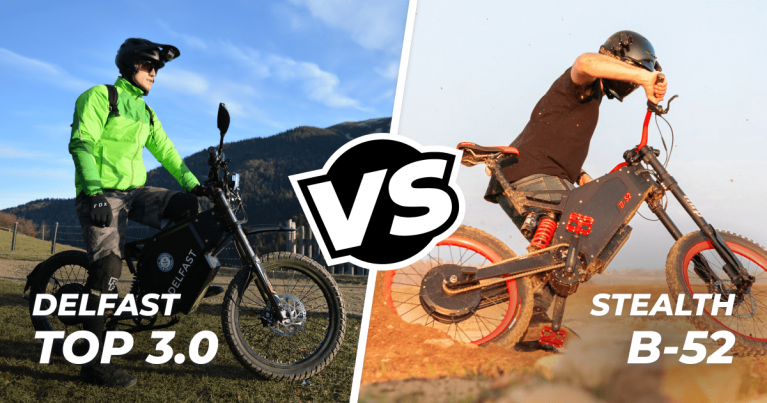 There are some alternatives that challenge the TOP 3.0 that have appeared in the market. The Stealth B-52 is a serious contender for the throne of high-performing e-bikes. How do these two vehicles compare? Find it out in this thorough comparison.

Adventurous riders love pushing their electric bicycles to the speed limit. Local legislation regulates e-bike speed on public roads in many countries. However, racing tracks and private property are the perfect scenarios for speed riders.

In this department, both the TOP 3.0 and B-52 offer a top speed of 50 mph. It is an outstanding speed by any standard! But, how long can they sustain riding at that speed?

This parameter refers to the maximum distance an electric bike can travel on a single battery charge. This value depends on the type of terrain and level of pedal assistance that the rider requires from the e-bike. No standardized method to measure the range of an e-bike exists. However, manufacturers usually measure it on flat terrain using the throttle mode only.

In these conditions, the TOP 3.0 has no rival with its 200 miles range. This range is comparable to values typically seen in electric cars. After all, Delfast holds the Guinness world record for the longest distance traveled by an e-bike on a single battery charge. The B-52 reaches a more modest range of 60 miles, which is very good compared to most e-bikes.

The TOP 3.0 is equipped with a 3,000 W motor, capable of reaching 6,000 W of peak power. For its part, the B-52 has a more modest 2,000 W electric motor. However, it can develop 6,200 W of peak power. The peak power is critical to delivering a boost in the most challenging situation like uphill riding. Hence, while the TOP 3.0 is more powerful on average, none of these e-bikes will let you down when a maximum boost is needed.

For its part, the B-52 is equipped with a 72 V battery that delivers 2,000 Wh. While this battery capacity is very good compared to most e-bikes in the market, it is no match for TOP 3.0. The battery of the B-52 takes 4 hours to be fully recharged.

The total weight of an electric bike may or may not be critical. For example, if a rider needs to carry their e-bike up several floors on the stairs, weight can be a deal-breaker. Otherwise, heavy e-bikes tend to be more stable and reliable on bumpy terrain.

High battery capacity, enormous power, and long-range come at a price. The TOP 3.0 weighs 154 lb, which is heavier than most e-bikes in the market. The B-52’s total weight is 112 lb, which is also heavy but significantly lighter than the TOP 3.0.

When it comes to high-end electric bikes, paying a higher price doesn’t necessarily get you the best product. The TOP 3.0 has a significantly longer range than the B-52. It is also slightly more powerful. Its retail price is $6,599, which falls within what you expect from an e-bike with these characteristics.
On the other hand, the B-52 has a price tag of $9,880. The price difference is significant.

All specifications used are taken from the official websites of the mentioned brands. 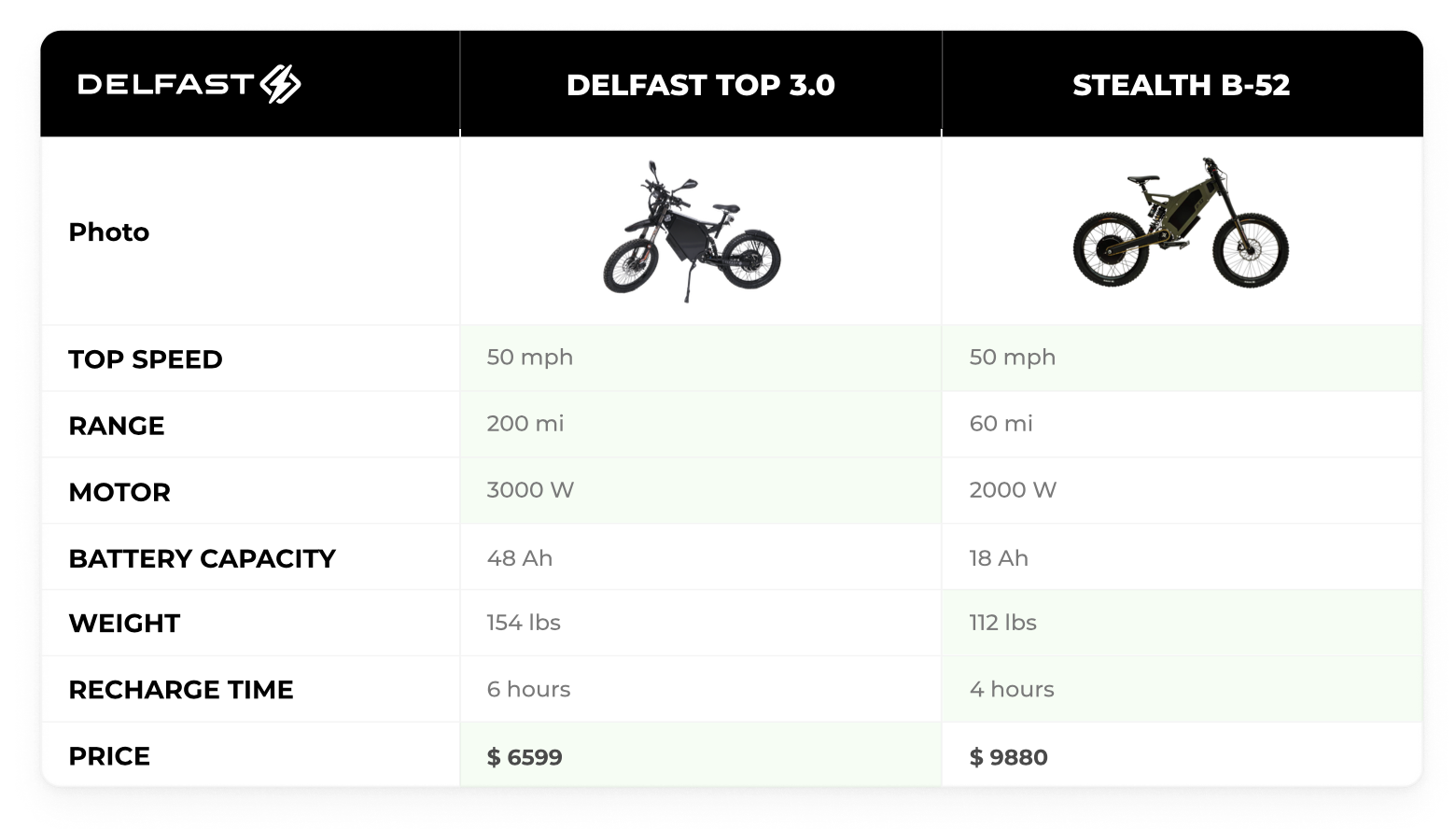 ━ go back
Any questions?
Thank you, we'll call you back soon!
Back ─